I absolutely frikken LOVE LOVE LOVE not working Fridays! It’s a new thing and I’m grabbing the opportunity to use it as mummy and Bambina time.

Today we packed up the nuts, packed up the bread and headed off to our local park to feed the animals. Bambina loves animals, makes all the noises and is an eager beaver to call any passing dog, cat, squirrel or duck to come talk to her! 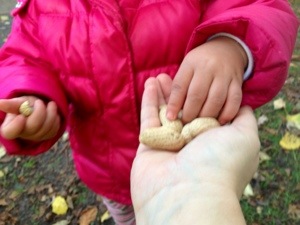 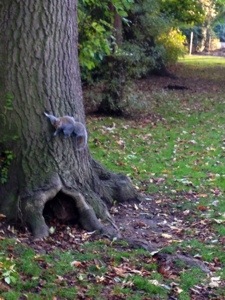 Today was a right autumn affair. The leaves were golden, the air was crisp and Bambina looked cute as a berry in her little love heart hat and matching gloves.

She had an affair of her own with the squirrel crew and managed to eat as much bread as she fed to the ducks! Don’t all babies do that? a piece for me, a piece for you… 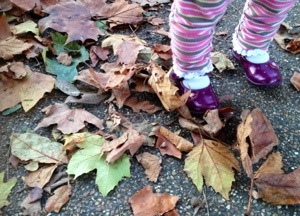 We had a lovely autumn day, running through the crunchy leaves, jumping in puddles and relishing in mummies no work Friday! 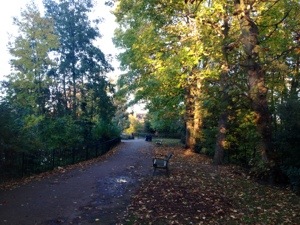 What things have you done to enjoy the autumn? Do tell… It might give me inspiration for Friday next week!

Posted by Tea&Biscotti on November 2, 2012 in London

We have just returned from a rushed weekend to Italy to bring my mother in law home from hospital.

At 30 weeks pregnant I had to get a medical certificate to fly but thankfully everything was ok. I had contemplated not going at all but how could I not, under the circumstances?

Anyway, enough of the dreary tone.

The Italian booked me wheelchair assistance as our flight out was at 6.30am. What a genius idea! It worked a treat and is actually a service provided by Ryanair. We were taken straight through controls and escorted all the way to the aeroplane steps. Brilliant!

Having woken Bambina from her slumber at 4am I half expected her to have a tired tantrum or two. No. She was a delight. She sat in her pram just watching the early morning world go by. She didn’t utter a word or a groan.

As we were boarding the plane, Bambina got excited and squealed at the sight of having her own seat belt and pull down tray. I was so proud of her, so well behaved.

She sat on the Italian’s knee for take off, all buckled up and holding on tight. As the engine roared and the plane took flight, her little green eyes looked at me to confirm everything was ok. I smiled a reassuring glance and she happily nestled her head of curls into daddies chest, closed her eyes and went to sleep.

She woke up when the captain announced our decent. The lady that was sat behind the Italian tapped him on the shoulder to tell him what a wonderfully behaved baby we have. She was amazed at how Bambina hadn’t created one ounce of fuss. The Italian beamed and rewarded his good girl with a big kiss on the forehead.

It’s a lovely feeling when strangers pass comment on how wonderful your child is. It makes me/us feel like we’re not doing that bad a job of raising a good little person. I couldn’t have been happier that my little Bambina Mia had taken the early bird flight in her stride and as always adjusted to her surroundings. She’s just amazing!

Grazie Bambina for being absolutely adorable… Mamma loves you!

What things do your little ones do that just melt your heart? Do share.

I think it’s quite normal for a second pregnancy bump to be huge. I am huge. I feel huge. I think I look huge. In comparison to when I was expecting Bambina, I swear it looks like I’m carrying a football team!

A few weeks back I had to see my consultant about making a decision between a natural (give me drugs!) vaginal birth or another c-section.

Bambina was twelve days late so I was induced. Three times. It didn’t work. Eventually my waters were broken and although I had been having contractions, nothing else happened. The Italian almost electrocuted me from playing with the knobs on the TENS machine but nothing else happened. After twenty hours, I had dilated two centimetres. After a further six hours I had dilated an extra centimetre and retracted to two again.  I also had an allergic reaction to the epidural.

I was insistent I didn’t want an epidural, or pethadine, or a c-section. I had all of it. I was exhausted. I don’t recall the c-section that well, except for my legs convulsing so much that they had to strapped to the table. I don’t recall seeing Bambina that well for the first time. I just remember a blurry image of white, whether that was the towel she was wrapped in or her still covered in mucus, I don’t know.

I don’t want that experience this time around. Bambina was stuck in the birth canal as she was so huge, 10lb 4oz. The consultant thinks that this baby could be bigger given the size of me now at 29 weeks.

So, I was offered a helping hand or the chance to go it alone. If your hand is willing to help me, I’m ready to bite it off! C-section it is.

I’ve just had a GTT (Glucose Tolerance Test) to measure the amount of sugar in the blood.  This is not just for determining pregnancy related diabetes but can also be a guide as to why some mothers deliver whopping babies.  My gut feeling is that my glucose is absolutely dandy.  If you saw the Italian and his father, they’re not exactly small framed people so I think that any baby that I have will be on the large-boned side of big.  Nevertheless, I did the test and we’ll see what happens.

As I’m now on countdown with only 10 weeks to go, I’m actually looking forward to the c-section this time. I know the date, I know the plan, I know I won’t be in pain (ish).

I know that my big baby will arrive in to the world, happy, healthy and huge!

Was your baby a whoppa? Tell me everything!

Soon it will be Bambina’s first birthday and as her understanding of Italian is developing at the speed of a Ferrari, I have been on a mission to find her some bilingual English/Italian toys.

Other than this orange Chicco kangaroo that I found on eBay, let me tell you, the search for toys has been no mean feat! Leap Frog do a lot of French and Spanish, VTech do a few things in French but English/Italian toys are extremely hard to come by. I understand that this may be because Italian isn’t spoken much outside of Italy by non-Italians and it isn’t on the British national curriculum as a second language of choice.

You would think that Chicco, Italy’s biggest children’s brand, would have an array of items to choose from. They do. In Italy. Toys that speak only Italian, not English too. I have found very few that offer both English and Italian. Disappointing.

We have a few music CDs in Italian and one story book but I really wanted something interactive. She is very musical and has recently started singing!! I say “singing” but really mean humming a tune to ‘the wheels on the bus’ melody.

Nevertheless, I want to buy her something that speaks English and Italian, has music and lights, is educational and something fun that she will enjoy.

Thank goodness Planet Lingo came to the rescue and recommended Babeltots!! I have fallen in love, IN LOVE, with everything!!

There’s a funky camera that teaches numbers, colors and greetings. There are several musical story books that Bambina would absolutely love. There is even a mini laptop that helps the baby learn parts of the body with musical games! First there was no choice – now there is too much choice!

Grazie Planet Lingo, your recommendation of Babeltots has made this mamma a very happy lady and thanks to you, Bambina is going to have an extra wonderful first birthday with her new toys!

* If you are teaching your child/ren to be bilingual, do check out Babeltots as there are many languages and toys to choose from.

** Disclaimer: I have not been contacted by or asked by Babeltots to review their products. I am just so absolutely thrilled to have found a company that supplies bilingual English/Italian toys that I wanted to tell the world about them – that’s it.